Regarding Retribution 2014 TICKETS NOW ON SALE

Regarding Retribution 2014 TICKETS NOW ON SALE

You will be playing 4 games of Warhammer Fantasy on Saturday 8th November 2014.
£15 entry.

Two games at 1,000 points and two games at 2,400 points.
You will need two lists. Everything from your 1,000 points list must appear in your 2,400 points list.
You can add to units, you may not remove anything.
All the games will carry equal weight in your final tournament points.
All scenery will be ordinary, mundane, plain, without any magical effects.
Chaos Dwarfs are allowed.

Location: The Games Shop, Aldershot. Close enough to the town centre that we will not be catering. You'll be able to get tea and coffee from the venue, but you'll have to nip into town for lunch.

The pack gives you more details. Clicky the piccy. 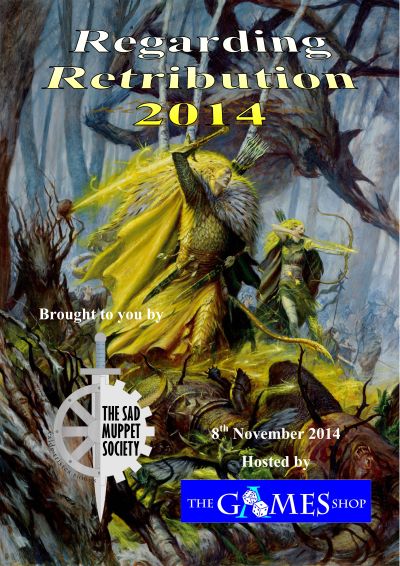 To reserve your ticket, or ask any questions about the event, please email rr@sadmuppets.org
Once we've received your email, you will be sent a Paypal invoice for £15 within 7 days, so please make sure you tell us what email account to send it to if something other than the email you're contacting us from. If you want to pay another way, let us know how when you email.

by poi
Here are the questions from last year's event. They all still apply.

Q Is the Wood Elf Free Wood a normal wood (i.e. no special rules), or is it mysterious?
A The wood elf wood is chosen by the player. It must have the same footprint as a Citadel Wood.

Q The Beasts spell Curse of Anraheir: "the unit treats all terrain (other than impassable terrain) as dangerous terrain...." Does Open Ground count as 'Terrain' for the purposes of using this spell.
A Open terrain is still terrain.

Q How about upping the level for a wizard?
A No. Then you're getting into ditching the character and replacing him with a better one.

Q Can you swap the BSB to another character making one character cheaper and another more expensive as you go into 2400pts?
A No. You can never make anything cheaper as whilst you can add gear, you can never remove it.

Q Can you change generals?
A You can swap to a different general for the larger list, but you must still use the character from the smaller list in the larger one.

Q Can you add to a characters cost? So a L1 goblin shaman with a scroll at 1000pts becomes a L2 with a scroll at 2400pts?
A Yes, but not in the way you suggest. You can add gear, but not mage levels, unless they are granted by an extra magic item.

Q So you can add items to characters? i.e. Can I have a 90 point character in my 1000 pts list who I then add another 20 pts of magic items to in the 2400 list?
A Yes, but only add some, not remove any. So you couldn't swap a magic sword for a better one, for example.

Q Ok so basically just so I'm clear. I couldn't afford a Slann in my 1000 pt army so my BSB would have to be something else. I then can't transfer the BSB to the Slann for the full army list is that correct?
A Correct

Q Just to check - can you add a BSB to a Hero from your 1000 point army. i.e. he isn't the BSB in the first list, and becomes the BSB in the second (with all the other equipment he had when in the 1000 list of course, which would preclude you from taking anything on him in the 1000 list that was incompatible with being a BSB) ? Adding a Magic Standard to a BSB from 1000 point has been covered somewhere, but no specific confirmation that you can do this.
A Yes you can.

Q Can players swap lores between games?
A No.

Q How will Unmodified be ruled for the purposes of Unmodified leadership at the tournament?
A As in the current rulebook FAQ.

Q Do the dice you roll to wound a wizard from feedback scroll count as rolls to wound for the purpose of hatred fetish (reroll failed to wound rolls)?
A No, as in the Beastmen FAQ.

Q Can Epidemius use Tally from inside the Portalglyph?
A Yes.

by poi
The new Wood Elf book has changed the free wood to use the plastic Citadel Wood, and this is how we will play it at RR14.

by Chilledenuff
Could people use a wood of there own devising if it was the same footprint?

by poi
Undead Legions will be legal, but none of the extra End of Times rules, so no Undeath lore for everyone, and no extra points on Lords.

The new Undead rules only apply to Undead Legions chosen from the Nagash book. If you choose your army from Tomb Kings or Vampire Counts, use the rules from your army book.

by poi
Been asked a few more questions:

The new Nurgle stuff isn't out in time for RR, so won't be permitted. The limit is one month, as per the pack.

Characters can have additional gear, but may not lose gear, so for example you could add a magic weapon if you didn't take one at 1000 points, but not swap one.

Wood Elf Enchanted Arrows may not be duplicated across units. Nothing in the WE book to suggest different, only that it allows access to another enchanted item.

ASF + Great Weapon cancels out and reverts to Initiative regardless of opponent, so model with ASF will reroll if their Initiative is equal or higher.


Not received any army lists yet. Deadline to get the tournament point is midnight on Saturday 25th October.

Still have a few tickets left, so not too late to sign up. Email me rrATsadmuppets.org
All times are UTC+01:00
Page 1 of 1
Powered by phpBB® Forum Software © phpBB Limited
https://www.phpbb.com/